William Henry Fox Talbot: Dawn of the Photograph examines how Talbot’s invention of photography in the 1830s evolved to establish the artistic, scientific and industrial possibilities for the art. Drawn from the National Media Museum’s unique collection, the works selected for this book are a testament to Talbot’s magical and industrial vision, ranging from the delicate capture of natural specimens to more staged and functional ambitions for photography as a means of mass production. Considered as both an art and a science, photography was a perfect example of 19th-century modernity as well as a medium that still appeared mysterious and alchemical.

Published to accompany a Media Space exhibition at the Science Museum in London, this catalogue examines how Talbot’s invention of photography evolved to establish its artistic, scientific and industrial possibilities. Also explored are the relationships within the network of photographers who gravitated towards Talbot’s process, each of whom took photography into different territories. Featuring 100 high-quality reproductions of Talbot’s work, Dawn of the Photograph is a testament to his magical and industrial visions, as well as his ambitions for photography as a means of mass production.

Written by Dr Russell Roberts, Reader in Photography at the University of South Wales and Greg Hobson, Curator of Photographs at the National Media Museum in Bradford. The William Henry Fox Talbot: Dawn of the Photograph paperback book measures 26 cm x 23 cm 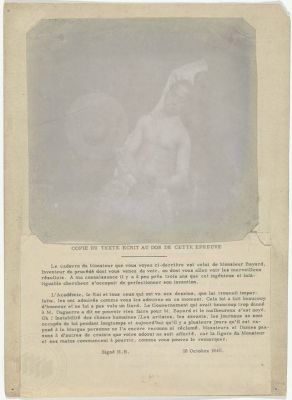 Come to our major new exhibition on William Henry Fox Talbot,  polymath and pioneer of Victorian photography, to see one of the world’s most comprehensive and important collections of his work.
In the nineteenth century, as the industrial revolution boomed, Fox Talbot revolutionised culture and communications by inventing the negative-positive process, a technique that formed the basis of photography around the world for over 150 years and immortalised him as father of the photograph.
Discover the influence Talbot’s revolutionary technology, techniques and practices had on his contemporary practitioners – Anna Atkins, Hill and Adamson, and Calvert Jones – and see original prints from his seminal publication ‘The Pencil of Nature’ alongside the oldest surviving daguerrotypes by fellow photography pioneer Louis Daguerre.

Book your ticket now to explore the life and work of the man who defined what was possible in the formative moments of photography.